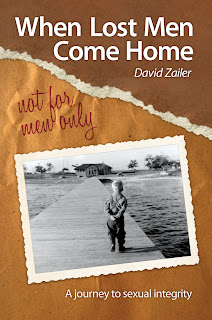 
Having lost the ability to stop my addictive behaviors permanently on my own, the only life I knew was a life of hopelessness. I had tried everything I knew to try and nothing had worked for me. I hated my behaviors and most of all I hated myself. Destruction grew inside me, and consequence grew around me, spilling over into the lives of others. Though I wanted to with all my heart, I could not stop the accelerating madness that characterized my life. At times I thought I had proven to myself that everything was going to be okay. But I was only deceiving myself, suffering one of the key hallmarks of addiction: denial, which is another way of saying, “I don’t even know I’m lying.” Also, denial of addiction is where we use seemingly rational and logical arguments to defy the addicted reality of our lives. In this way I marched self-willed, self-deceived and self-centered, unknowingly, deeper into my addictions, hating myself increasingly every step of the way, hoping and praying that everything would be okay, but fearing it would not be.


In the fellowship we share our stories with each other, how very often we could successfully (temporarily successful) bridle and contain ourselves, only to see our addicted compulsions ooze into other areas of our lives. Perhaps someone who used escort services and massage parlors would stop visiting them for a while and begin to believe he had conquered his problem. “Success” had been achieved, or so he thought; he was feeling great. Everything seemed fine, but sooner than later, he found himself living and behaving addictively in other areas of his life: alcohol, drugs or prescription medications, food, spending, gambling, work, and even the obsession of controlling the lives of others. The list of addictions is virtually endless; ultimately the results are the same.


Most all of us in one way or another substituted or rotated our addictions. This proved we were still addicts with dark secrets, toxic shame, and a laundry list of growing interpersonal failures. Our best efforts by themselves had changed nothing except the flavors and colors of our destructive patterns. Subconsciously, our addictions had become a permanent part of our lives. We were masters of ignoring the addicted reality of our lives, blind to see how we protected the addiction and denial that was destroying us. In rare moments of insight and clarity, we’d grasp the insane thinking behind our rationalizations, our minimizations and our excuses. But a moment later, we’d forget the pain our addictions created for us and others, thinking that all was well, that we were in control, and that we could have our cake and eat it too.


It seemed no matter how many times we hurt ourselves and others, we held on to the delusional belief that somehow, someway things would end differently the next time, opening the door to repeating the addictive cycle once more. Soon we were acting out again, always with the same result, a life of decay and personal demoralization. Insanity! Definition of insanity: Doing the same thing over and over again and expecting different results.


Reality is that any addiction that goes unnoticed or is not acknowledged by the one who is addicted will most likely intensify in obsession, frequency and duration. Addictions most always progress, although the addicted person usually doesn’t realize it. Addictions simply outsmart people in this way. An immensely complex human phenomenon, addictions are fluid, odorless and colorless in all their forms. The pioneers of addiction recovery, Alcoholics Anonymous, assert that addictions are, “cunning, baffling and powerful.” And they are.


Personally, I’ve found my own addictions to be very patient, hiding inside me and waiting to strike at the moment most destructive to me. Without fail, whenever I acted out in my addiction, my life and circumstances would begin to erode and my relationships would begin to suffer. Inside, I would feel as if everything good about me was being corrupted. There were times when I felt dead and spiritually I was. Quietly, inch by inch, I was being sucked dry of my dignity and my humanity. Evil wins every time when I pursue instant gratification and when it came to my sexual addictions, I was being robbed of and losing the most precious of God-given human dignities: my ability to make healthy and sane choices for myself.


In sharing with each other in the fellowship, we admit that we often felt victimized by those around us, but we really were just victimizing ourselves. Every day we fought harder and harder to hang on to the life we thought we wanted, and each day we lost a little more of our life, suffering injury every step of the way, always still fighting, and always still losing. We had been using our sexual behaviors as a way to escape from reality, but our escape had become our prison. When we experienced pain that seemed too much to handle, we resorted to our addictive acting out, and this increased our painful guilt and shame, which in turn created an increased likelihood of more destructive and severe acting out in the future. Caught up in this downward spiral, we were doing what the addiction demanded instead of what we truly wanted to do. Progressively, sexual addiction gave less and took more from us, even corrupting the personal values and priorities we professed. In one way or another, everything we said had become a lie. After a while no one believed us, but us. We were deceived, believing it impossible to stop even though we wanted to. At best, all we could honestly admit was that we wanted to want to stop.


In years prior to recognizing my own addicted condition, I had known others who suffered from very obvious addictions. Unable to relate to them because of my own denial, I would say things like, “Poor guy, too bad he never got his act together — better him than me.” Or, “Thank God I’m not like him. I can stop whenever I want to.” Or perhaps I had said, “I’m not like him, I’m only having a good time.” And of course, on numerous occasions I said, “I’m not hurting anyone.” These were my common thoughts of self-deception. And I believe many of us have shared these thoughts along with me.  I was a master of rationalizing, minimizing and excusing, stubbornly denying the possibility that I was caught in the power of something bigger than me. I was just like the sad people I so righteously pitied, but I couldn’t see it.


At first glance it would have appeared that sexual addiction was my most dangerous problem, but it wasn’t. My most dangerous problems were the supporting denial and addiction to my own ego, my self-sufficiency and the belief that I was in control. Protecting my egocentric denial was the root problem that initiated, contributed to and maintained every addictive thought, desire and action I had. AA calls this “self-will run riot, natural instincts gone awry.” My life had become scripted by a warped sense of what I thought I needed and wanted, not about what was truly good for me. Furthermore, my commitment to control myself, my circumstances, and the lives of others in order to feel “okay” was killing me.


Our God-given instincts turn against us when we are dedicated to rule our own lives as if we were master of our own world. With an attitude like this, we lose sight of what we really need and want for our lives, blindly moving in a direction we don’t really want to go.


I rationalized to myself because I couldn’t explain my actions. I made excuses to others because I had no real answers for their questions. Being always committed to appear “normal” to others, I would hide my cries for help so those around me would only see the counterfeit image I felt I had to portray. Then, unable to live with my own self-deception, I would begin to think about the relief my addictions could bring me and I would return to what had poisoned me time and time and time again.


“Hell on Earth” is where the men of our fellowship have lived. And in our fellowship, we admit that the demands of our self-centeredness were too much for us and, we believed, too much for anyone else, too. Becoming ever more frantic, we looked for greater and more extravagant ways to prove ourselves acceptable to the world around us, hoping that someday, somehow we could truly believe in ourselves. We were fools and didn’t know it! Does a fool ever know?
copyright 2012, David Zailer
Click link to purchase When Lost Men Come Home
http://www.amazon.com/When-Lost-Men-Come-Home/dp/0615598234/ref=sr_1_3?s=books&ie=UTF8&qid=1358194196&sr=1-3&keywords=when+lost+men+come+home
Posted by David Zailer at 12:11 PM